The movie Captain Fantastic portrays a sort of scenario I think many of us have entertained at one time or another. Pack a knife, some food, and a bag full of books and gap it into the wilderness. Live off the land, and indulge our atavistic tendencies – a simpler, more fulfilling life. Probably too simple…

The protaganist, Ben, and his wife appear to be disillusioned, but well-educated activists who’ve moved their family deep into the Washington state forest. They teach their kids the perils of capitalism, and instill instead the value of living in harmony with nature, surviving off the land. School happens around the fire, and they go hard in the paint chewing through a reading list that would make Noam Chomsky quiver with happiness. Of course this all goes awry when they’re forced to reconnect with the family they left behind. But more on that later.

Sounds great, huh? I know plenty of people who’d like to give up this unfulfilling modern life and get closer to our paleolithic roots. Certainly the tedious saturation of health and well-being advice centering on this idea indicate a hungry audience. But there are two problematic assumptions that strike me with this idea that are worth considering.

The first assumption is that we are aware enough of the conditions that optimally satisfy human needs. It’s an easy thing to say we evolved to achieve one thing, and we now conduct ourselves in service of something else (and usually something that’s less ideal for us than the first thing). But it turns out that the evolutionary narrative is far more complex than this and has rightly been critiqued as a variant of Kipling’s “Just So” stories (e.g. how did the giraffe get her spots? By getting splashed by a muddy hippo). One can tell any number of plausible “just so” stories about the conditions that produced whatever evolution. Far harder to conclusively prove it. One example I would pull out of Captain Fantastic’s world is the size of his family. You have Ben, his wife, and their six kids. A group of 8. But the research following Dunbar’s seminal works on community size indicates, if nothing else, that we can support far larger groups. To suggest that a small number in a more ideal environment (e.g. one family in the woods) is any better than a more ideal number in a less ideal environment (e.g. a good workplace, or a social club, or even one of those beautiful cul-de-sacs where all the kids are the same age and as a consequence everyone knows one another) seems to be a bold claim. We know that community relations and social interactions are vital, if not one of the single most important factors related to human well-being. Can a small group really fill that need? It’s a question worth asking.

The second assumption is actually something of a paradox. Humans have access to physical and mental resources we don’t necessarily use and a kind of extraordinary flexibility to thrive. From Siberia to the Sahara, we can dominate almost any biosphere. So we should take advantage of those resources and put them to work. But of course, the reason we’re doing that is because we have been taken out of some ideal environment (i.e. the wilderness) and placed into another context (i.e. the modern world). All of a sudden, that unique robustness we were talking about becomes a fragile, brittle thing, prone to shattering under the attendant pressures of modern life. Are humans robust or not? To say they are robust in some contexts and not in others implies that, in fact, they are not robust but are rather sensitive to changes in the environment. It also assumes that the kinds of problems we see today and the historical prevalence of various mental and physical illnesses are not mirrored, if not in kind, in number with that of the ancient world. Everyone’s favourite book on this topic (Sapiens) places the blame squarely on the shoulders of agriculture, and more and more we seem to think that the nomadic, hunter-gatherer lifestyle was the peak of our environmental suitability. But was it? For example, are we willing to accept enormous levels of infant mortality? In Sapiens, Harari explicitly points out that agriculture allowed our population to boom. Which implies of course that we accepted a far higher rate of death back then. Is that ok? I’m not sure it’s enough to say these would be mitigated by integrating modern medical knowledge into paleolithic activities. I’m not sure there’s enough research to conclude that hunter-gather communities are indeed better off. Certainly, I’d be surprised to find some categorical evidence that some modern-ancient hybrid lifestyle is more idyllic or optimal (although I’m open to anyone who might point me in that direction). I would probably be more likely to err on the side of caution and say that we are robust, but different environments pose different challenges and require an emphasis on different skill-sets.

Ben’s escape into the wilderness sure as shit is a solution to something, but what that thing isn’t entirely clear. Rather than trying to radically go back to some amorphous ideal, perhaps we should continue working towards narrowing down the conditions that support well-being. Rather than a continuum from ancient to modern, it would probably look more like a landscape with many peaks and valleys. Which is why, when the movie delivers it’s soft ending, with the kids going to school but living on a farm and the oldest setting off to find himself in Namibia, I think the idea is probably correct – to seek some kind of middle ground. While the moral of the movie (that the grip of modern life will not allow a wholesale return to our atavistic roots) certainly holds some weight, I think addressing these more fundamental assumptions is more important. 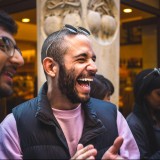 I read and write about cognitive science. Sometimes I train honeybees. I promise they're related. My special interests are interpersonal relationships, the science of community, spirituality and the brain, and the neural basis of complex behaviour.